Australian cricketer Fawad Ahmed as had an amazing journey over the past six years. Having arrived in Victoria in 2010 after fleeing Pakistan, Ahmed is now a permanent fixture in the Victorian Cricket team, being part of the Australian side on a number of occasions.

In his early days here in Australia, not knowing the system, Fawad struggled to become involved in cricket. His priority was not only finding a club to play for, but finding a club that would help support him, and provide assistance in finding work and integrating into the community. Fawad's opportunity came at a North Melbourne training session where a former player, and now captain of Hoppers Crossing Cricket Club, offered him a place on the team. Fawad enjoyed cricket there; not only did he achieve personal results, he also helped his side win the premiership that very same year. 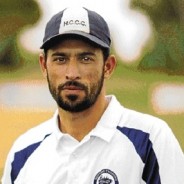 In the early days at the club, Fawad mentioned that it was at times tough for both he and his team mates to converse. The welcoming environment of the club however allowed him to make a number close friends whom he would often invite over to his home to share meals.

Having performed exceptionally well for Hoppers Crossing, winning Player of the Year and taking the most wickets, he signed on for a second year where again he performed exceptionally well. Fawad then joined Melbourne University where the success continued and the club was able to assist him on and off the field, helping him with critical paper work. It was not too long before he made his state debut for the Melbourne Renegades in the Big Bash League, starring for the Victorian State Team in the second half of the 2012-13 season. Ahmed made his international limited-overs debut in August 2013 after his success in the Australia A side. Fawad was not suprised by his call up, it was a testament to his hard work and performances. Fawad has shown that sport and religion can co-exist, even during the month of Ramadan where Muslims fast during sunlight hours. Despite what must be a difficult month with intense training, Fawad remains focused and has become accustomed to it as part of his routine.

"I never said no to anything because I didn't want the religion to be an excuse", said Fawad.

Fawad attracted controversy when in 2013 he expressed his displeasure at wearing the Victoria Bitter logo on his Australian Cricket team shirt due to his Muslim faith. Cricket Australia granted Fawad permission to wear the Australian playing top without the logo. As a result, Fawad was forced to endure a number of remarks from high profile figures about this situation. Despite disagreeing with their views, he still respected them.

"It is a free country. They are allowed to have have their opinion, I just don't have to agree with them", Fawad said.

When asked about his faith, Fawad spoke very strongly of the fact that people can say something demeaning to him, but he can ignore it or brush it off. Fawad does however care very strongly about people attacking the Muslim faith. In light of the recent terror attacks, many Muslims have come under fire, and the religion as a whole being blamed for the attacks.

"Islam is a beautiful religion. It is like a Lamborghini. If that car has a bad driver, it does not mean the car is bad. The way the car is driven will vary depending on who is in the driver's seat", said Fawad.

"We need to be united in this time. Sport is one of the best vehicles to unite people. People can play regardless of race, culture, and colour."

Fawad is an incredibly humble individual who enjoys playing cricket. Whether it be for Melbourne University, the Victorian State Team, or Australia, he maintains a 'team-first' mentality. He does not get caught up in National Team selections, rather, controlling what he can control on the field and leaving the rest up to the selectors. He wants to be involved in communities, bringing people together, giving people like himself a place to feel safe and be involved.

Without the welcoming nature of a community club, who know where Fawad's career, and possibly Fawad himself may be. Sport needs to continue to promote welcoming, inclusive environments for all, giving everyone the right to play.